One of the goals of OpenInsight 10 was support better integration between the development tools and the Repository, which is why we provided a separate “Repository” tab for entities when they are opened in the IDE, thereby making their attributes easier to view and edit.

This in turn allowed us to expose a Repository feature called “Evaluate Notes”, which has actually been part of OpenInsight since version 2, but was only really used by some system processes (mainly the old and deprecated “Impact Analysis” feature) and provided no user interface to allow editing.  This has now been rectified and is available from the Repository tab as you can see here:

The Evaluate Notes functionality is composed of two parts – an “Evaluate” flag, and the notes themselves. The latter is simply a text field where you may record your notes and have them attached to the entity in question, e.g: 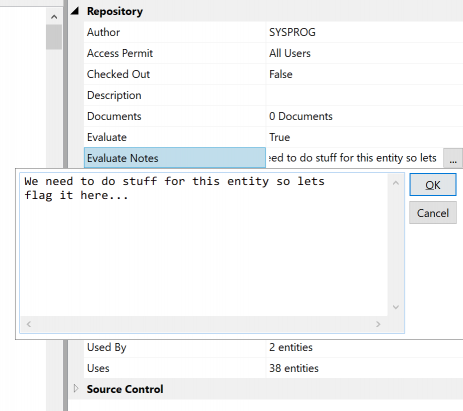 The Evaluate flag, when set to True, adds the entity into one of the Repository indexes so that a list of entities with that flag can be obtained quickly.

It is then a simple matter to query this index and obtain a list of all entities flagged “in need of evaluation”, which you can actually treat as a “to-do” list if you wish.  We already provide this list in the IDE by means of the “Evaluate” tab in the “Quick Launch” tool panel as you can see below:

Hopefully this is a feature you find as useful as we do!