Over the past few posts we’ve taken a look at some of the new controls we’ve added to OpenInsight in version 10, but during the development process we’ve also taken the opportunity to upgrade some of the existing controls as well.  In this post we’ll take a look at the humble Label (or STATIC) control and examine some of the new features that have been implemented for it.

The Label control now exposes the full Image API in the same way as the version 10 OpenInsight WINDOW object does.

The BACKCOLOR property now supports gradients in the same way that the current OpenInsight WINDOW object does, along with the associated GRADIENTSTYLE property.

The Label control may use a translucent background via the TRANSLUCENCY property.

As part of OpenInsight’s Aero Glass support, transparent labels drawn on glass in Vista and Windows 7 have the recommended “glow effect” enabled to improve readability:

Vertical as well as horizontal text alignment is now supported via the TEXTALIGN property:

A TEXTORIGIN property is also exposed that allows you to specify the exact XY position that you wish the text to be drawn at in a similar manner to the standard IMAGEORIGIN property.

Label controls can now respond to a mouse-over or “hot” state via the new HOTFORECOLOR, HOTFONT and HOTBACKCOLOR properties.  When set these properties are used in place of their standard counterparts (FORECOLOR, FONT and BACKCOLOR) when the mouse is over the control.

The following standard events are now exposed for Label controls:

In addition to this we’ve also provided a new MOUSEOVER event along with a notification flag for when the mouse enters and exits a control (We intend to extend the MOUSEOVER event to cover all OpenInsight controls).

By default normal Windows Label controls actually support a “edge-style” that allows them to have a sunken or etched border, or even display themselves as a single vertical or horizontal etched line.  Although this capability can be used in earlier versions of OpenInsight via raw style-bit manipulation we’ve exposed it fully in Version 10 via the EDGESTYLE property.  This can be one of the following values:

Label control with a sunken border

Label control with an etched frame

We’ve exposed a couple of new text handling properties: AUTOELLIPSES and WORDWRAP.  The former allows truncated text to be suffixed with the ellipses string  “…”, while the latter allows text to wrap in an effort to avoid truncation where possible.

One of the new capabilities added to OpenInsight 10 forms is Aero Glass support, a feature that Microsoft introduced with Windows Vista and unfortunately removed in Windows 8 (in the interests of disclosure your author is not a great fan of the “improvements” to the desktop in Windows 8). Still, Windows 7 remains extremely popular and will be around for many years to come so it makes sense to provide an Aero Glass interface for developers who wish to use it.

Aero Glass is exposed via the following properties:

This property is a simple @fm-delimited dynamic array of margin values that specify the areas on the form that should be rendered using the glass effect.  Basically everything between the edge of a form and it’s appropriate margin value is rendered as glass. 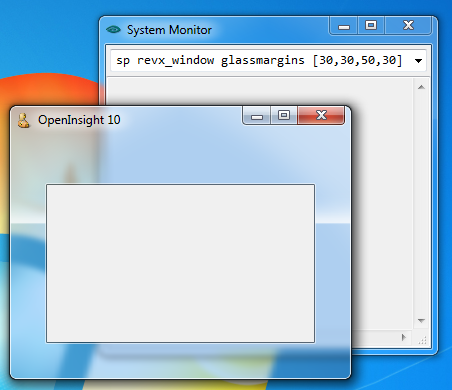 Note that setting the margins to “-1” forces the entire client area of the form to be rendered as glass instead. 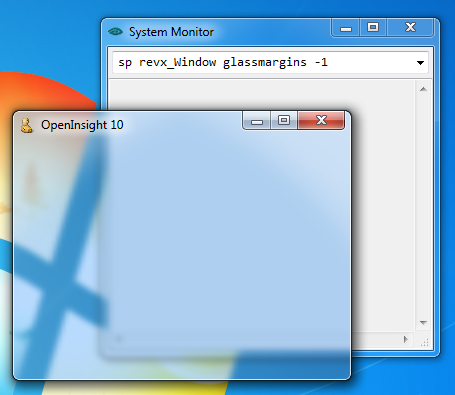 This is a boolean property (1/0) that enables or disables the Aero Glass effect for a form.  The GLASSMARGINS property must have been set before this property can be used to enable glass rendering.

What happens when Aero Glass is not available?

Of course it’s entirely possible that your application may have to run in an environment where Aero Glass is not available, such as running under the Aero Basic theme or on Windows XP.  In these circumstances the OS would “give up” and your form would be rendered with a normal client area like so: 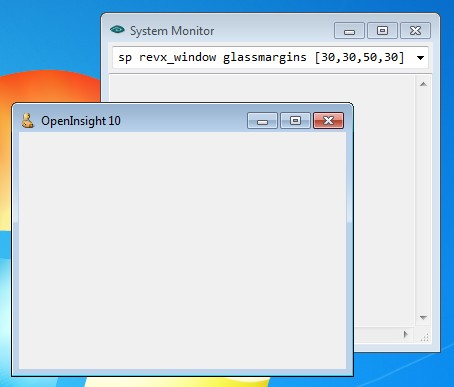 As you can see there’s no hint of the glass margins, so this will probably make your glass-based UI layout unsatisfactory.  In this case we’ve gone one step further and implemented a “Fake Glass” effect (much like Windows Explorer does under Aero Basic): 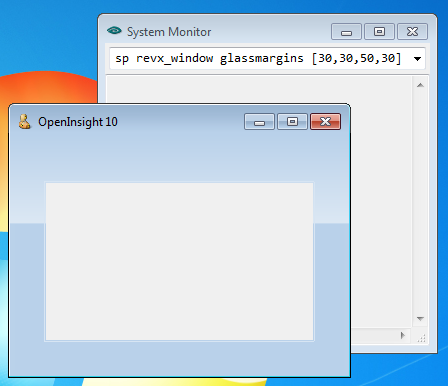 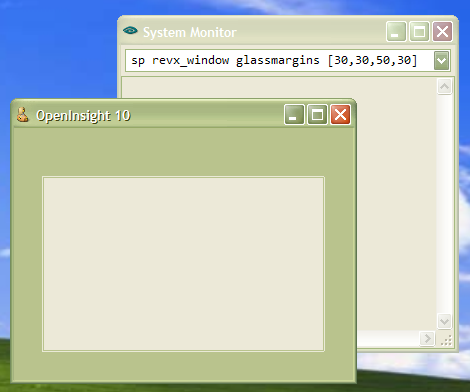 Of course, as Microsoft removed Aero Glass in Windows 8 they actually supply their own replacement, which simply paints the solid frame colors into the “glass” margins like so: 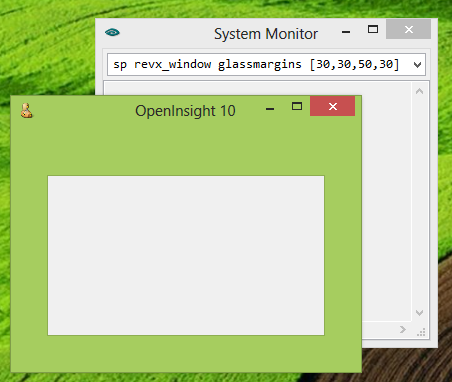